This article is geared towards people who want to try out the Paleo diet and who just want to quickly know what they should and shouldn’t do.

No background science here or lengthy explanations, only 15 easy rules to follow to kick start your Paleo journey. It’s up to you to decide to what extent you want to follow those rules, but if you follow them 100% you can be assured that you are eating the best food for your body and greatly investing in your long term health and well-being.
The 15 rules of the Paleo diet
Click here for the original link:  ---> http://paleodietlifestyle.com/paleo-101/
Posted by Unknown at 3:28 PM No comments:

In my pursuit of healthy eating and whole foods, I've come across some recipes that call for Kimchi.   I never had much interest in making my own but the other day while shopping at the amazing Earth Fare store I happened upon a jar of it!   Yay!!!! It's vegan, gluten fee, raw and a good source of probiotics.  (according to the lid)  Made of cabbage, carrots, red peppers, leeks, crushed red pepper, green onions, garlic, ginger and sea salt.  It comes in different levels of heat.  I chose spicy and it's not lying.
http://www.sunjaskimchi.com/Scripts/default.asp

I paired it with our famous Lexus Almond Chicken and some fresh green beans that I also picked up at Earth Fare.  It ended up being a pretty amazing dinner with a definite bite to it. (spicy)  Oh and don't let the smell of the Kimchi get you. Cabbage can be a real turn off by smell alone.  It's actually really yummy.

The almond chicken recipe can be found on an earlier blog in May 2013.  It's easy and you can use chicken of any sort to make it.  Using the cayenne pepper and chili pepper is what gives it good flavor.

The green beans, although not Paleo, is all whole good ingredients.  The Non Paleo in the family really like green beans so I try and treat him every once in a while. (wink)
I used the bacon grease as suggested, not butter. And I let it cook every minute of the 30 minutes.  The beans come out crisp and tender with great flavor.  This time I threw in a few little red hot peppers from the garden cut up. 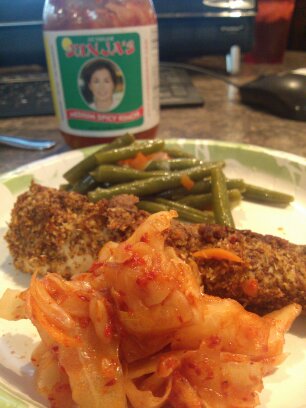 Fresh Green Beans
1 lb green beans
1 cup chopped onion
2 cloves garlic
1/2 cup chopped red bell pepper
2 tablespoons bacon grease (can substitute 1 T butter and 1 T olive oil)
1 cup chicken broth
1/2 to 1 teaspoon kosher salt (can substitute regular table salt; use 1/4 to 1/2 teaspoon)
Ground black pepper
Snap the stem ends of green beans, or cut them off in a big bunch with a knife if you’d like. Just don’t tell Granny. Melt bacon grease in a skillet over medium low heat. Add garlic and onions and cook for a minute. Then add green beans and cook for a minute until beans turn bright green. Add the chicken broth, chopped red pepper, salt, and black pepper. Turn heat to low and cover with a lid, leaving lid cracked to allow steam to escape. Cook for 20 to 30 minutes or until liquid evaporates and beans are fairly soft, yet still a bit crisp. You can add more chicken broth during the cooking process, but don’t be afraid to let it all cook away so the onions and peppers can caramelize.
Posted by Unknown at 6:17 PM No comments:

Let me just tell you...this is a favorite.  It reminds me of Chicken Sausage.  I made mine slightly larger and for the Non Paleo family members I made Panini's with cheese on chabata bread.   ( I have no idea how to spell in case you haven't picked up on that reading my blogs.)  I didn't really alter the recipe, however my apples were not organic. I did use raw honey.  Easy to make, easy to fry up.  I used the G. Foreman grill, but I'm sure the big grill would have made them better.
They were also very yummy cold....and reheated three days later.  The website gives freezing directions.  Check it out! 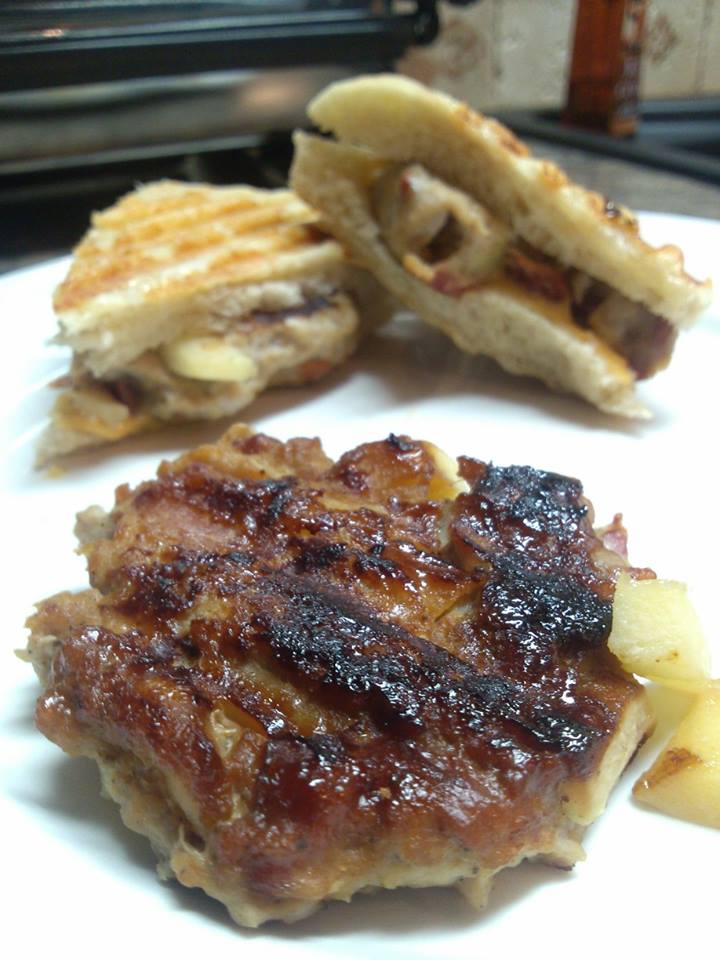 Preheat outdoor grill or stove. In a large bowl, combine grated apple, celery, poultry seasoning, salt and pepper. Mix in honey, chicken, and cooked, crumbled bacon. Shape chicken mixture into 1/2-inch-thick sliders, using 1/8th pound of meat per slider. Grill over medium heat about 4 minutes per side, or until cooked through. Serve and enjoy! 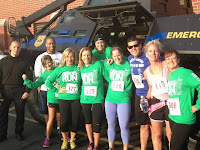 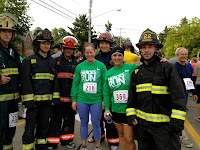 Today was a great day!  I participated in the

As I ran 5 miles I thought about all the things our public service men and women do every day to keep us safe. The risks they take, and for some giving their lives.  I thought about the families they leave behind and the sacrifices they make as well.  Participating was my way to show my support and appreciation.


Not to mention I got to spend the morning with some of my favorite people!! 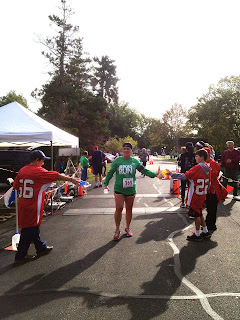 I must say the 5 miles was a huge PR for me.  The most I've ever run has been a mile at a time.  I've run 5k's before but usually with a lot of walking and obstacles in between running.  This was just running for 5 miles up and down hills of the metro parks.  I was happy with running the first 3 miles, walked most of the 4th (it was up a big hill) and then ran the last mile.  I'm not sure of the official finish time but it was just over an hour.   I'll take it.
Dinner was a challenge considering my legs were not feeling so hot. I have a huge blister on the bottom of my left foot that started about halfway through the 3rd mile.  So my right leg is really sore because of compensating for the sore left leg.  UGGGG

I've made these in the past and they are becoming a favorite! 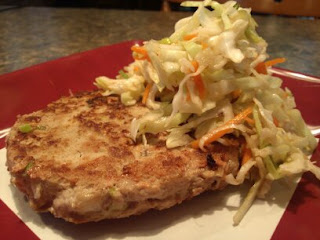 They are simple to make.  Be sure to make the slaw first so it has time to marinate.
I also used olive oil on the grill pan. It didn't get as burnt as the cooking spray does. (I used that the last time and yuck).  Also Coconut Aminos are not found at Giant Eagle.  I've only had luck at the stores like Whole Foods or Earth Fare. 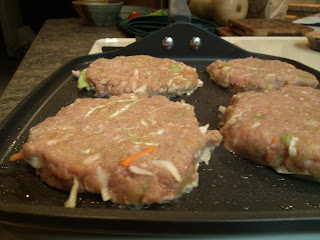 
4 Tablespoons Coconut Aminos
3 Tablespoons red wine vinegar
1 Tablespoon water
1/2 teaspoon sesame oil (DO NOT omit - adds amazing flavor)
1/4 teaspoon crushed red pepper flakes (or more)
1/8 teaspoon garlic powder
1/8 teaspoon ginger powder
1 green onion, sliced
Remainder of coleslaw mix from 14 oz bag. (about 4-5 cups)
**In case you are wondering about this "Coconut Aminos" business, it is a soy-free soy sauce substitution that is approved for the paleo lifestyle.  Although I was a bit dubious at first, one taste changed my mind.  Justin just couldn't believe there was no soy sauce in this recipe. If you use regular soy sauce, cut back by about 1 TBS.

1.) Preheat skillet to medium on your stove top, and spray with your non-stick spray.
2.) Add turkey burgers and cook on medium for about 5-6 minutes.
3.) As turkey has very little fat, I found it helpful to spray the pan again when you flip the burgers, cooking again for 5-6 minutes.
4.) At this point, my burgers were still a bit pink in the center, so I covered the skillet and cooked for another 4 minutes.
5.) Take off skillet, put on plate, and top with the slaw.
6.) Devour.

Posted by Unknown at 3:23 PM No comments: