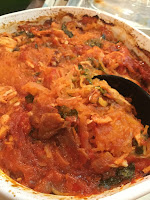 The link above is the inspiration but I really just threw similar stuff together and it was delicious.

The first thing with the recipe was, too much effort in adding spices and sauce.  I found a good marina sauce that has no added sugar. (Carrabbiata Spicy Marinara)  It was more expensive then your average sauce, but worth it in taste and it was in compliance with the elimination diet program.

I  baked the spaghetti squash first.  I cut the squash into rings which made more complete strands, which gives it a little more "real" noodle effect.  http://www.youngandrungry.com/spaghetti-squash/

I boiled the chicken because that was faster and less messy then grilling or baking.  I also used the chicken tenderloins rather then breasts.

While those cooked, I chopped an onion and some garlic.  Next added some olive oil to a hot pan and sauteed the onion first, then added the dried mushrooms for a few minutes.  Added a bunch of spinach with the garlic and sauteed until the spinach was wilted.  (1-2 minutes)  Turned off the heat and added the jar of sauce. 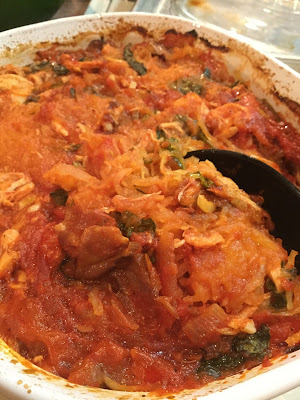 Bring it all together in a casserole.  Cover and bake in a preheated 375 degree oven.   I baked it for a good hour or more.  I also would recommend taking the lid off for the last 30 minutes to help the liquid evaporate.  Let the sides get brown and bubbly.

This is a great meal for easy travel and reheating.

Watch soon for my blogs about the Elimination Diet!

Posted by Unknown at 4:15 PM No comments: