About three months ago I ventured into the "Keto" program.  I won't spend explain it on this post, but I will on others.   It's been used for years to treat diabetes and severe brain disorders such as epilepsy. With Paleo fading, Keto is picking up popularity.  So why not give it a try!!  The basics of Keto......High Fat, Moderate Protein and little to no carbs.  Eat Cheese it says, OK. Eat high fat foods like butter. OK. Eat proteins but don't skimp on cutting off the fat. OK.  Eat Bacon.....need I say more.

During my research on Keto I came across the Oopsie Bread recipe.  I already tried Cream Cheese pancakes that were to die for, so how can the bread be bad if it's made with cream cheese also?   It was super easy and super delicious.  Like with any food we're making healthier, if you think you are going to eat bread when  you bite into it, you'll be disappointed.  But it does have good flavor and the consistency is great for eating things like a hamburgers or if you want a tuna salad sandwich for a change.    This morning I had an open faced fried egg sandwich with mashed avocado spread on the oopsie bread before I placed the egg on it. 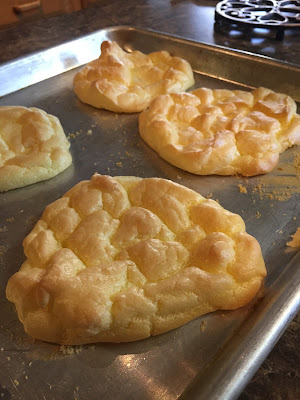 Crazy easy.  I took three large eggs and separated them.  I put the egg whites in my counter top mixer, added 1/8 tsp cream of tarter and turned it on with the whip.  Then I took the hand mixer and mixed together the egg yolks and 3 oz of cream cheese.

You have to let the whites beat a good 4-5 minutes and make sure they are forming firm white peaks.  Then fold in the egg yolk and cream cheese.  Careful not to "mix" to much as you'll break down the whites.  Just fold in with a spatula until combined.  Spoon onto a greased cookie sheet and bake 30 minutes on 300 degrees.

Don't over cook.  I had one a little crumbly on the edge that clearly cooked more cooked then the other ones.

Let sit and then place on cooling rack, let sit overnight or a few hours.  Store in Ziplock with paper towel to keep them from getting moist.