This video blog is a year old.  I look back on it and think how I've done so well with this program but now a year later, I feel I've completely abandoned most of what I've learned.  That's terrible.

I have not really abandoned most of what I've learned, it's just amazing how easy it is to stray from what you know is good for you and give into what is bad for you.   It's a constant reset.  I do my best to tell myself, you don't fail, you make choices.  And as long as you continue to make good choices, even among the bad choices, in the end you'll be better.

The year 2019 is the year to move past the crutch of blaming others. (you know those not like minded people)

Follow my journey as it enters a new chapter. The elimination diet and functional medicine has helped me get this point, now it's up to me to take it to the next level and then maintain it for optimum health as I get older.

Let's start with a recipe for Candied Pecans.  Because who doesn't love Candied anything?
Heres the site: https://www.gnom-gnom.com/?s=candied+pecans 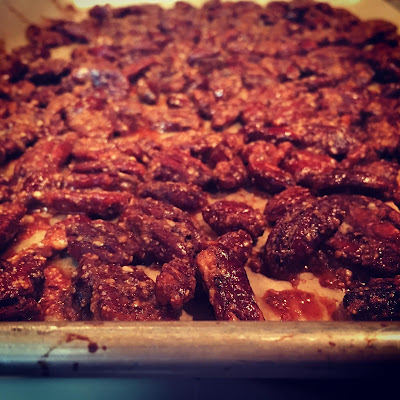